At Camp Kitty, we are committed to meeting a high standard of care for the cats you entrust to us. Our staff, many of whom have been with us for many years, are specially trained to provide your cats with the care and attention they need to feel comfortable during their stay. Gwen jokingly calls herself the Jane Goodall of cats. Although she didn’t have a cat of her own until her late 20’s, she has learned a lot through reading, observation, and firsthand experience. Her love of cats began soon after she adopted her third dog. As a compromise, she promised her husband that three was enough, so no more dogs. He didn’t say anything about cats, though, so, one day Gwen brought home a foster cat – a diluted tortie named Clea. After Clea found her forever home, Gwen fostered more cats. In the summer of 2007, she brought home a 2-year-old black cat named Birdie, who Gwen loving calls her third “foster fail”. Birdie, you may remember, inspired the beginning of Camp Kitty.

Gwen has always had a love for animals. Growing up, she had a canary, a duck, turtles, and dogs. Unhappy in the corporate world, Gwen discovered her true passion when she got involved in animal rescue. For four years, she served as the Animal Services Director for Atlanta Animal Rescue Friends. And through that organization, she has fostered five dogs and more than 40 cats. Currently, Gwen actively volunteers at Alaqua Animal Refuge usually as a Goat Getter, Cat Companion, or her favorite, Pig Pal. And she also fosters kittens through Save Our Cat & Kittens (SOCKs). She is a member of the International Boarding & Pet Services Association.

Gwen splits her time between Atlanta and her home in Florida where she lives with her husband, their two human children, two precocious cats (Birdie and Lucas), and two senior dogs (Madison and Tiggy). In her spare time, Gwen enjoys kayaking, cycling, drinking lots of cheap wine, swimming with her kids at the beach, and bird watching. Myra’s love of cats started at birth, literally. The family’s tom, Sylvester, almost immediately decided that baby Myra’s crib was the best place to sleep, and that baby Myra was the best cuddle companion ever. Sylvester ended up being the first of many cats she has loved over the years.

Myra seriously thought about becoming a veterinarian until she remembered that she doesn’t really like dogs all that much. Or blood. Instead, she opted for a master’s degree in Clinical Psychology. After nearly two decades of social work, Myra was left wondering what she wanted to be when she grew up. Thanks to her volunteer work with Atlanta Animal Rescue Friends (AARF), she discovered Camp Kitty and began working there part-time. Myra was quickly promoted to Assistant Manager.

In her free time, she enjoys cycling, hiking, letterboxing, reading, building jigsaw puzzles, and all types of arts and crafts. (You can often purchase her crocheted catnip mice at camp.) She dedicates a lot of time to raising money for the National Multiple Sclerosis Society through both Bike MS and Walk MS. She and her husband share a home with their (spoiled rotten) cat, Calvin, and their foster cat, Caesar. Myra has also fostered other AARF cats and kittens, and frequently takes home a foster cat or two from work when Camp gets busy and cabin space is at a premium.

Ever since her parents let her pick three kittens to adopt when she was five, Jayne says that cats have been a big part of her life. She’s come a long way since dressing her cats up in doll clothes and carrying them around the house. Before she began volunteering with Furkids, Jayne only knew about feeding cats, giving them love, and cleaning up after them. There she learned techniques to work with shy and untrusting cats. She learned a lot about the shy ones and spent a year working with one cat in particular to help make her more adoptable. And since she started working at Camp Kitty, she has developed an affinity for seniors.

When Jayne isn’t loving on cats at work, she’s probably loving on them at home. Jayne and her husband have four felines: Layla, Reesie, Monty, and their most recent addition, a senior named Capers. After leaving a job that was not feeding her soul, Grace found her way to Camp Kitty where she could direct her love for cats into something more productive. Not long after, she also became a barista at Java Cats Cafe, whose lounge cats are adoptable through Paws Atlanta. Even after a day of working, Grace often finds herself sticking around to play with the cats. She admits that she can no longer deny her "cat lady" status.

Grace had dogs, hamsters, and fish growing up, but due to her father's allergy, she couldn't have a longed-for cat companion. So, she was left to live vicariously through friends who had cats until her current fur baby named Puck came into her life. Although he is still an only "child," it's only a matter of time before he gains a new sibling...or two.

Besides loving on cats, Grace also enjoys sewing clothing and other items for herself and cats alike, doing DIY home decor projects and other crafts, hiking, practicing yoga, and reading. Adrian’s desire to be a cat mom began in middle school. However, despite her numerous pleas, it wasn’t until she was a sophomore in college that her parents let her adopt Kitty Girl. Her experience with the sweet, lovable, cuddly Kitty Girl only served to solidify her love affair with cats. She has many fond memories of Kitty Girl but her most cherished are the many naps they shared. Sadly, Kitty Girl left to go to kitty heaven about three years ago. It took a while for her to recover, but when her best friend started working at Camp Kitty, she visited her there and fell in love all over again and was overjoyed when she was offered a position there too.

Adrian loves caring for and playing with all the different cats that come to Camp Kitty with all their various moods and personalities. When she’s not working at Camp Kitty, Adrian enjoys drawing, cooking, gaming, gardening, and aquascaping. Meet Our Counselors Get to know our team of professionals. 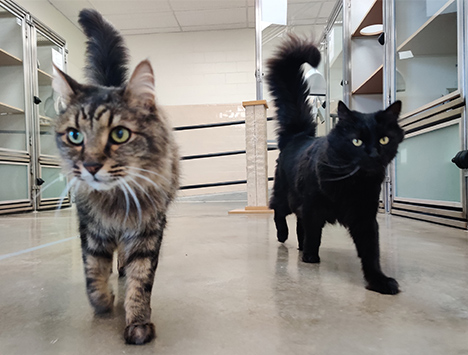 The Camp Kitty Experience What to expect when your cat stays with us. Join Our Team We’re hiring cat-loving individuals to join our team.
My cat has been boarded in a few different places, but Camp Kitty easily takes the cake.— Ayesha S.
Great place for dedicated care for your feline friends. — Patty C.
Wonderful, caring, conscientious staff. Best cat boarding facility in town with competitive prices. — Yolanda A.
Camp Kitty has been an amazing place for my cats to spend time away from our home. — Carolyn D.
It’s wonderful to have a place to trust to take care of my cat while I’m out of town! — Michael B.
I recommend Camp Kitty to everyone I know who owns a cat! — Alyson V.
Caring for Atlanta's Cats Since 2009
Hours
Location 2959 East Ponce de Leon Avenue Suite 200, Decatur, GA 30030 Get Directions
Connect With Us
Facebook   Flickr   Google   Instagram